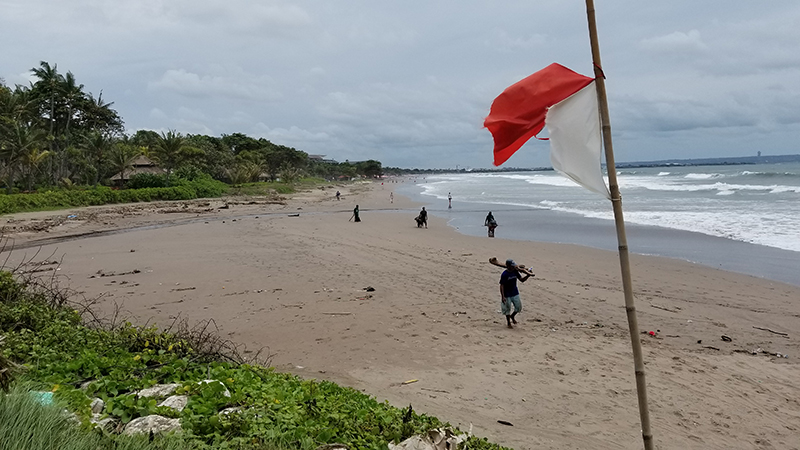 Rubbish piled up on most local beaches after heavy rains hit Bali during the last two days. There was a lot of plastic, but the majority was organic waste like coconuts and tree branches, etc. Kuta beach was also closed to swimmers due to the bad weather.

Kuta, Kedonganan, Seminyak, Canggu beaches were all hit hard. The Head of Badung Environment and Sanitary Board (DLHK), Putu Eka Marthawan, confirmed that the amount of rubbish hitting the shore was caused by the bad weather. Some of the worse Bali has had this wet season.

“The length of the piled up rubbish reached around 12 kilometers. We had a thousand personnel to help clean it up, but we still could not handle it all at once,” said Eka Marthawan to balipost.com on Tuesday. 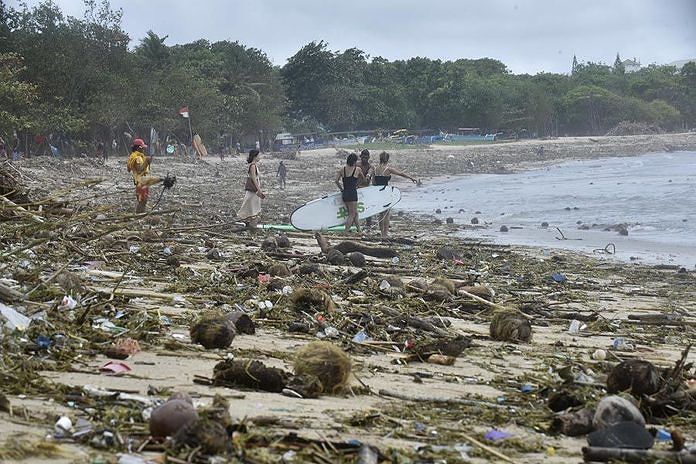 Above photo: Kuta beach on Tuesday from Bali Post

He also said that this incident was the worst that had ever happened. “There would be 50 tons of trash removed on a normal bad day, but there was something like 250 tons, the equivalent of 12 trucks of rubbish, yesterday,” he said.

More bad news came when they could not send all the rubbish to the Suwung Landfill.

“We had to wait seven hours to dispose of all the rubbish in the trucks. It was too long, so we had to pile it up in places along the beaches,” he added. He also apologized if the rubbish irritated the local residents and tourists. “We apologize for this inconvenience and we will do our best to clean all of the rubbish up as fast as possible,” he said.


Meanwhile, Head of Badung Lifeguards, I Ketut Ipel said that they closed Kuta Beach on Tuesday morning as the weather was characterized as extreme. Swimming and surfing was banned all day because of the conditions and lifeguards were on alert to keep people out of the water.

“The ban was for all activities in the water, but those who wanted to visit the beach were permitted. We only prohibited people swimming. Of course, this was only because of the extreme weather that is happening now,” Ipel said yesterday afternoon, Tuesday (1/22).

Meanwhile, the Head of Badung Tourism Board, I Made Badra, this morning, asked local residents and tourists to obey the guidance from the lifeguards (Balawista). “They may prohibit swimming again because of the bad weather,” he said. He also said that his side won’t close the beaches at the moment, but visitors must be careful and avoid water activities. Besides, they should be careful with the rubbish. “They should be careful, because there is a possibility that the rubbish will cause injuries or other incidents,” he concluded.