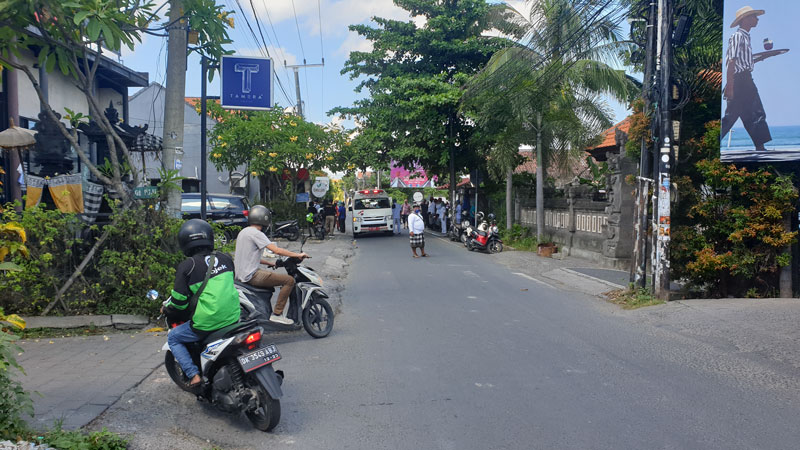 Berawa residents around Jalan Raya Semat, Tibubeneng, were shocked by a foreigner walking on the main street naked this morning, Monday (3/30/2020). Just a few weeks ago, another female foreigner was caught on camera walking near the same spot naked, but was not apprehended.

Head of North Kuta Sub-district, I Putu Eka Parmana said that the tourist was thought to have left Berawa Beach walking naked up the road at around 8.30am.

The tourist was followed by pecalang or the local traditional village security. Security officers did not immediately approach the foreign tourist for uncertainity involving the new corona virus or Covid-19.

The pecalang called health workers from the North Kuta Health Center and after they arrived, the foreign tourist was detained near the Canggu Shortcut.


“The health officers were all wearing personal protective equipment when they approached the man,” he said, Monday (3/30/2020).

After detaining the foreigner the pecalang officers provided him with clothing to wear and he was taken to Sanglah Hospital for further observations.

Parmana suspects that the tourist was experiencing some kind of mental health issue, possibly depression. As he explained to Kompas, before being caught man had banged his head several times on the footpath until he was bleeding.

Parmana did not know the identity of the man. According to him, they only got one word from him when apprehended which was ‘America’. So he is presumed to be from the United States.

“He was completely naked and had no identity at all,” said Parmana.

The two cases were not thought to be connected at present.