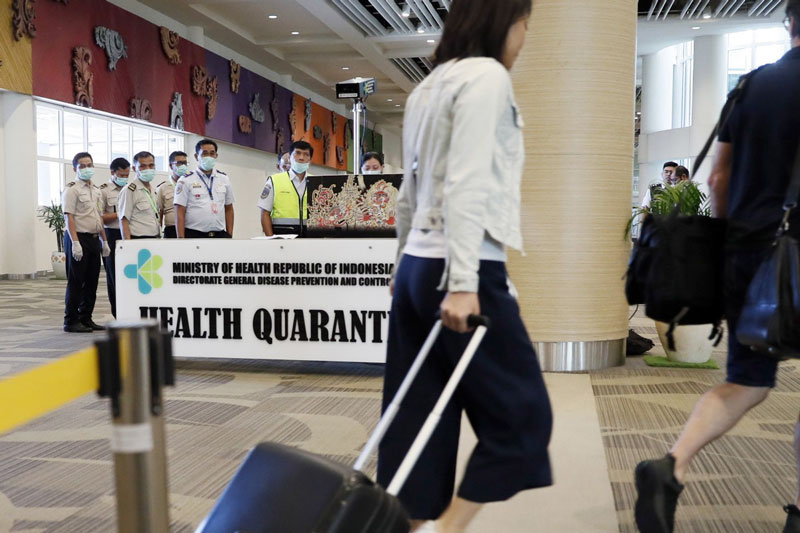 According to the Indonesia government, the corona virus outbreak in China has forced them to ban all flights indefinitely between Indonesia and the People’s Republic of China (PRC). The last flight to China left Denpasar Airport at 12.30am this morning, Wednesday 5/2.

In response to the situation, Governor Koster said in a press release yesterday that even though the corona virus outbreaks have infected several countries, Bali will always be ready to accept foreign tourists. He was optimistic as Bali already has a good monitoring system (contrary to what has been printed in some foreign articles), which has been successfully proven during other virus outbreaks including bird flu or SARS in 2003. Based on data received, he said there were 18 Chinese tourists who were found to be sick on arrival from 73,073 Chinese tourists who visited Bali since January 13, 2020. However, after intensive supervision and laboratory examinations were conducted, no one was exposed to the virus.

“Bali is very safe and ready to accept tourists from every part of the world. With excellent tourism products, tourists don’t need to worry at all,” said Koster in the press release.


Meanwhile, the Head of the Bali Tourism Board, I Putu Astawa, explained that the ban from the central government must be followed up. “This is a national decision. We must implement it,” he said to baliexpress.com.

Astawa did not deny that the policy will affect Bali’s economy. He explained that January 2020 should have been the high season for Chinese tourists, because Chinese New Year holidays. Because of the corona virus outbreaks, they predicted that 15 to 17 thousand Chinese tourists cancelled their visits to Bali.

However, at the same time, WHO (World Health Organisation) stated yesterday that all was not gloom and doom. The dramatic measures taken by China to rein in the deadly new coronavirus outbreak have prevented significant spread abroad, providing a “window of opportunity” to halt transmission. In an article in SBS news Australia this morning, WHO chief Tedros Adhanom Ghebreyesus said at a technical briefing to the WHO’s Executive Board in Geneva, “While 99 per cent of cases are in China, in the rest of the world we only have 176 cases.”

He also restated his call for countries not to impose travel and trade restrictions because of the virus.

“Such restrictions can have the effect of increasing fear and stigma, with little public health benefit,” he said, adding that 22 countries had so far informed WHO they were implementing such measures.

“Where such measures have been implemented, we urge that they are short in duration, proportionate to the public health risks, and are reconsidered regularly as the situation evolves,” he said.

Dr Tedros also said on SBS that the WHO was sending masks, gloves, respirators and 18,000 protective isolation gowns to 24 countries, as well as 250,000 test kits to speed up the process of diagnosing carriers of the virus.

So far 164 flights connecting I Gusti Ngurah Rai International Airport to all destinations in Mainland China have been canceled since midnight last night. Flights to Hong Kong and Taiwan are still flying. According to the Chinese Consulate, there are approximately 5000 Chinese nationals still on the island waiting for transport back to China.