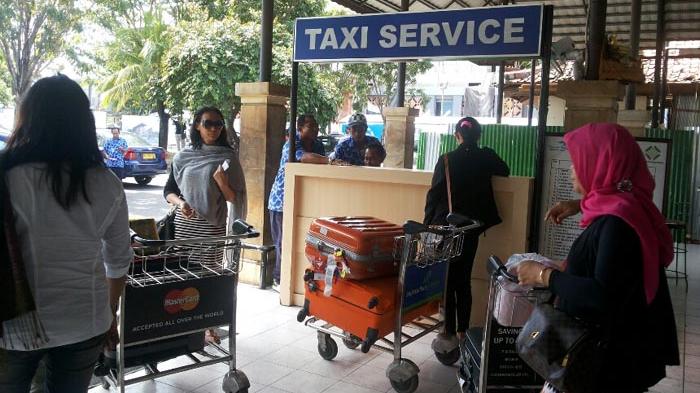 State-owned airport services company, Angkasa Pura (AP), recently claimed that for the time being they are unable to accommodate online

transport providers to operate inside the airport. “If the online taxis want to operate at the airport then they must submit an official permit in accordance with the existing law,” said Ari Ahsanurrohim, Head of Public Relations for Angkasa Pura I Ngurah Rai, as quoted by Nusa Bali.

He admitted that it was unfortunate seeing the violent behavior displayed by conventional taxi drivers towards their online peers, however he was firm about his stance in not accepting online taxis if their presence affects the conventional taxis, who are the airport’s “official” partner.

“We want them [the online taxis] to show us their permits, then we will consider it,” Ari added. “But what often happened before was friction where conventional taxi drivers would assault online drivers. So online taxis must adhere to the existing Standard Operational Procedure.”

Nevertheless, as of now AP I have yet to have an official SOP regarding the operation of online taxis which was partly attributed to the online transport ban issued by the Governor of Bali. But he claimed his team will start communicating with the Bali Transportation Agency regarding this matter.

“To avoid future conflict we intend to meet with the transportation agency soon. We need to come up with a solution concerning permits and make an agreement with the existing taxi operators so there won’t be any backstabbing and market overlap. We hope to create a common ground between the online taxi association, the regular taxi operators, AP I and policy makers.”

Arie hopes that in the future the regular taxi drivers don’t take matters into their own hands. “Their violent actions will reflect negatively to Ngurah Rai Airport. And don’t force passengers to get out of these vehicles because they have the right to choose for themselves. We really hope they (the regular taxi drivers) follow the right course of action.”