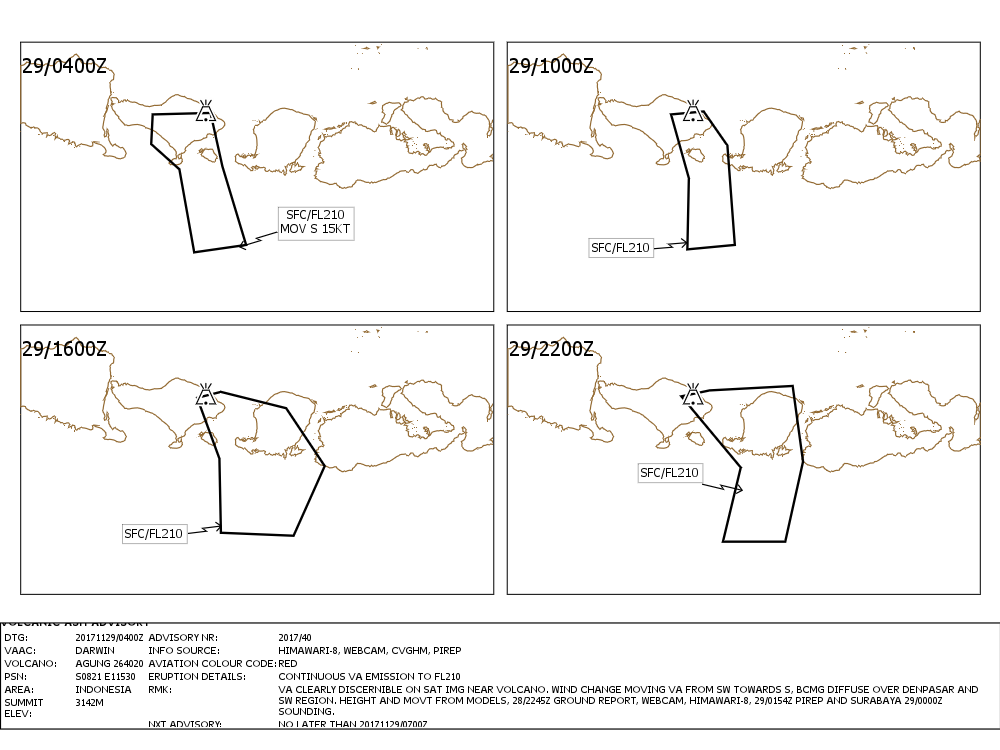 Image: Latest graphic from VAAC. Looking better for the moment.

Foreign and local tourists trying to leave Bali continue to arrive at Mengwi Bus Terminal on dozens of Damri buses organised by the airport to go back and forth. According to officials they have transported hundreds of passengers to the terminal since the airport closure began on Monday morning.

There have been buses added to the Surabaya route too. “Usually there are five buses on standby, but we asked to add more and we also use private cars as a backup so that all passengers to Surabaya are covered and not waiting too long,” he explained.

Meanwhile, the traffic flow on the national highway between Denpasar-Gilimanuk has been reported as solid. The flow of vehicles, especially cars and buses, both to and from Denpasar and Gilimanuk has been busy from morning to night. The ferry terminal at Gilimanuk is also busy with buses, trucks and cars going both ways. Officials there told Bali Post that there was an approx. increase of 80% travelers thru the port.

The visa is valid for 14 days and can be extended. This emergency permit is granted to foreigners but with a note that if before the Mount Agung eruption the visa was already over-stayed, normal overstay terms would be enforced.

More intriguing information from immigration was that today there are approximately 25,000 foreign nationals who live or are in Bali.

“That is the total number of foreign citizens whose visa was still valid, as of November 25, 2017,” said Head of Immigration Public Relations, Agung Sampurno.

“A total of 24,979 foreigners are living or visiting Bali,” said Agung.

And meanwhile some obviously loaded foreign tourists from Hong Kong found their own way off Bali and to Jember in Java to catch a private aircraft home.

The charter plane landed at Notohadinegoro Airport in Jember, East Java, on Tuesday and according to Jember Airport chief, the plane was originally going to pick up dozens of tourists from Bali but due to the closure of Bali airport the tourists used the land route from Bali to Jember regency to catch the plane.