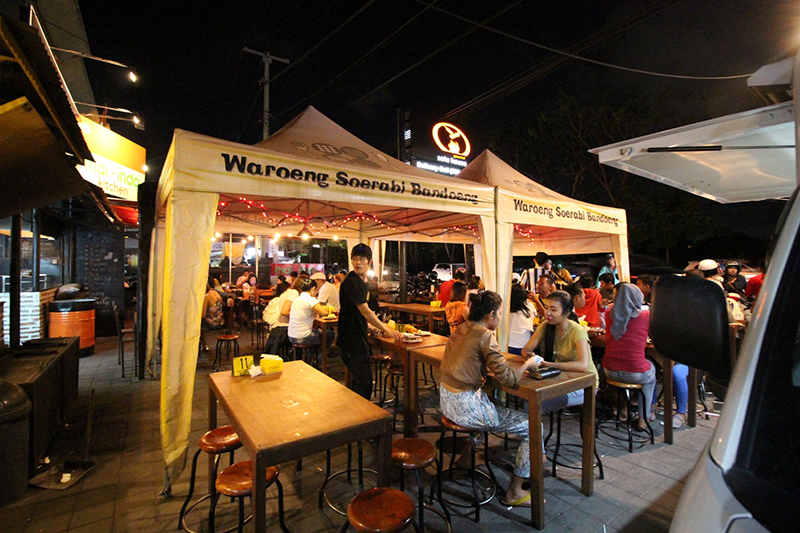 Kuta police arrested a foreigner after being reported for beating up two local men on Jalan Dewi Sri, Kuta on Friday night.

According to Kuta Polsek Commissioner, I Nyoman Wiratjaya, “The perpetrator, an Australian, J.F.D., 61, allegedly brutally attacked the two men without any reason,” as reported by tribunnews.com.

He also said that the suspect was arrested not far from the scene a few hours after the victims, Ade Irawan, 59, and Abie Prasetyo, 36, father and son from West Java, reported the incident to Kuta Polsek Headquarters.

The case began when the family from Bandung parked their car on the roadside of popular, local dining zone of Jalan Dewi Sri and went into Warung Surabi Bandung at around 10.45pm. When they were inside they apparently looked at the suspect the wrong way, which it would seem made the Australian man angry.

“It would appear that he was angry because they stared at him,” said the Head of Kuta Posek Criminal Investigation Unit, First Inspector Aan Saputra to nusabali.com.

After they finished eating, they went back to their car.

When they wanted to leave, the suspect began cursing the victims with impolite words, which they tried to ignore it and continue their exit. But as they continued to drive the car out of the parking spot, the suspect blocked their path and flicked a burning cigarette into the car, which hit the son and wife.


Both men got out of the car and asked the suspect why he did such a thing, but suddenly the suspect began hitting both men, with an uncontrolled fury, according to police.

“The first man was hit in the right forehead and right jaw, while the second man was beaten until his left chick, bottom lip, right rib and his waist were in pain,” said Inspector Aan Saputra.

Then one of the men took a steering wheel security bar from the car, which made the overly aggressive man back off.

The Bandung family went straight to Kuta Polsek to report the incident and police found and arrested the man shortly after near the scene of the crime.

The Australian man is still being held in Kuta Polsek Headquarters.